We’re coming for you, AWP. And we’re bringing Boston with us. 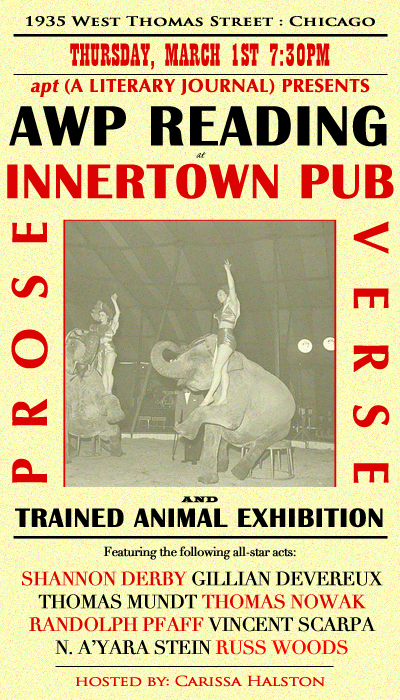 It’s official. We’ve bought our passes. We’ll be in Chicago for AWP 2012. Also, we’re hosting a reading at Inner Town Pub on Thursday or Friday night.

Videos from the latest Literary Firsts reading are up!

Pushcart Prize nominees from the first print issue of apt have been announced!

J.F. Lynch was the first to write an apt comparison!

We are once again accepting online submissions for apt!

There’s less than a month left until submissions close for the second print issue of apt. Thereafter, we’ll be announcing submission guidelines for forthcoming online content (prose only and 1000 words or less!), but more news on that in October.

Speaking of October, the year’s final Literary Firsts is just around the corner, so be sure to join us at Middlesex Lounge on October 17 at 7pm when Catherine Parnell, Janaka Stucky, Danielle Dreilinger, and Elizabeth Gormley will wrap up 2011 with a bang.

We’ve got a ton of plans for 2012 though–our first appearance at AWP, the second print issue of apt, and announcements about our next book. This one prose? Wait and see, readers. Wait and see.