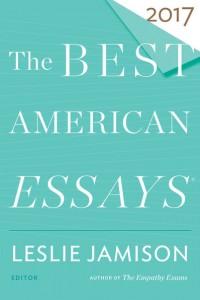 Earlier, we heard from our contributor Michael Nagel via Twitter, who asked if we’d heard that his essay “Beached Whales,” which we’d published last summer, was included among the notable essays in this year’s Best American Essays?

We hadn’t heard! And it was featured on LongReads! It was an exciting hour or two.

Then I checked our site stats and saw we’d also had referring traffic from the fine crew at Sundress Publications, who publish the Best of the Net anthology each year. Lindsey Harding and her short story “List Lard Label” was a finalist for fiction this year!

So I ran off to email Lindsey with the good news.

Then I wanted to see the table of contents and the rest of the notable essays for this year’s Best American Essays, so I looked it up on GoogleBooks, and found that apt appeared more than once. Philip Arnold’s essay “Stereoscopic Paris” was also among the notable essays published last year.

All of which goes to say it’s been an astoundingly busy day for apt news.

If you haven’t read Michael’s and Philip’s essays or Lindsey’s story, head over to apt and catch up on what you’ve been missing.