That’s When the Knives Come Down by Dolan Morgan 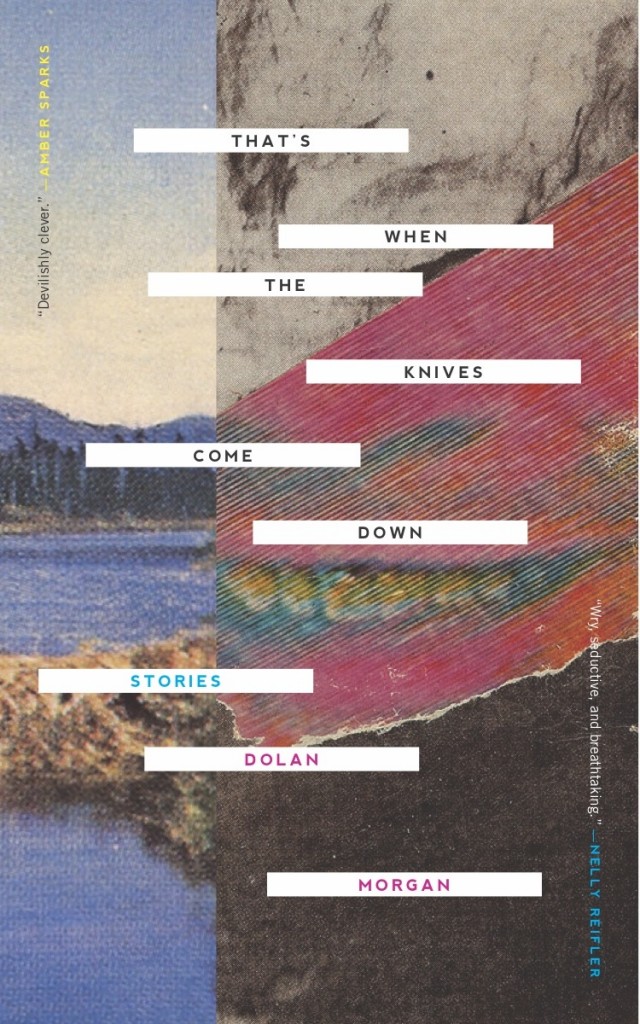 Dolan Morgan’s debut collection focuses on cities and relationships and lives gone awry. A man designs a city around absence to cope with his wife’s disappearance; an entire town exhibits symptoms of a monstrous disease; a sound overtakes New York, leaving its denizens lonely and shuddering and immensely aroused. A guy propositions his furniture, a volcano spews its ash, and a horde of enemies engage in a literally uplifting fight. Throughout, Morgan poses questions to the reader: if an endless hole exists in the earth, does it not also exist in ourselves? What happens if we dig a shallower hole? What happens when we fill it? At once absurd, harrowing, and inimitable, That’s When the Knives Come Down establishes Dolan Morgan as the writer whose voice will supersede your inner monologue and expose your roiling inner turmoil.

“Morgan debuts his refreshing talent in a collection of 12 short stories that are as bizarre as they are brilliant. Germanely punctuated by Robin E. Mork’s playful graphite drawings, the collection is driven by an idiosyncratic and absurd mind… ‘Experimental’ would be a misleading term for this one-of-a-kind book.”

“Dolan Morgan’s That’s When the Knives Come Down is a collection of short stories that seems to have missed almost everyone’s ‘Best of 2014’ list. This is a shame because its true place is at the top of these lists for its passion to discover new territories. Morgan is a brash talent not interested in running over ground already covered by Lorrie Moore, Lydia Davis, George Saunders and other luminaries with experimental flair. Morgan seeks something different, something along the lines of a lost continent to name after himself.”

“This is a book full of strangeness, and strange books can come apart pretty easily if they’re not coming from an author with a careful control of his subject matter. That’s When the Knives Comes Down doesn’t come apart; instead, it takes an obverse, often thrilling tack in its defiance of what we normally think fiction is supposed to do.”

“Morgan is a poet and its shows in his prose….Morgan is a true original.”

“If any book could compare to a twelve-ring circus with its author in the roles of ringleader, barker and headlining clown it would surely be Dolan Morgan’s That’s When the Knives Come Down, a story collection that uses the absurd to show us what truly makes us human. While some authors pose questions to the reader through thinly veiled narrators, Morgan’s work burrows into the reader’s psyche only to linger long after the last page asking not only ‘What else is behind this?’ but ‘What else is behind you?’  The unparalleled voice of this debut is surely one that will be copied, but not replicated by future writers.”

“Between the moment you lose something and the moment you realize it has been lost is That’s When the Knives Come Down. In the spirit of Donald Barthelme, Dolan Morgan queers the every day and leaves a sinister domestic scene behind.”

— Catherine Lacey, author of No One Is Ever Missing

“The stories that comprise That’s When the Knives Come Down are unpredictable, wry, seductive, and breathtaking.  The mysteries here are not metaphors, and Dolan Morgan’s worlds are not created in the service of our humdrum one. These places shimmer, expand, contract, blur, and somehow remain whole all the while.”

“That’s When the Knives Come Down is a series of broken parables, of roundabout answers to questions nobody asked, of dreams you can’t quite remember but felt so strongly about while you were having them. We are lucky to have these elusive things here, now, on paper, in front of us. Also, it’s funny.”

“Dolan Morgan’s stories in That’s When the Knives Come Down are finely wrought puzzles of humor and grief and the absurd. Read them and feel fortified.”

“The multiple worlds Dolan Morgan creates sit atop a shifting, slippery, unpredictable darkness, one that means you’d better not get used to getting used to anything in these devilishly clever stories.”

— Amber Sparks, author of May We Shed These Human Bodies

“Dolan Morgan has the might of a unique voice, and there aren’t nearly as many of those as you’d think based on book blurbs. But believe this blurb. Those who do not will be dumber for it and not know why.”

— Robb Todd, author of Steal Me for Your Stories

EXCERPT “Nuée Ardente” at Recommended Reading PRESS “Nothing Is Rewarding” – Interview at IMMATERIAL Journal “Nothing Works Until It Does” – Works inspired by TWTKCD, published at Sundog Lit Interview at Electric Literature Interview at with Nelly Reifler at The Believer Logger Interview at BOMB Magazine ABOUT THE AUTHOR Dolan Morgan lives and writes in Greenpoint, Brooklyn. ABOUT THE ILLUSTRATOR Robin E. Mørk lives and works in Brooklyn, New York with her husband and their cat. TRAILER Book trailer by Dolan Morgan, with music by Will Aronson. THAT’S WHEN THE INTERVIEWS COME DOWN That’s When the Interviews Come Down is a series of interviews Dolan conducted to coincide with each story in the collection. You can read Dolan’s thoughts on the series at Vol. 1 Brooklyn.