WRRR reflection, How Her Spirit Got Out, and apt 7

Readers, we’ve been subsumed by all the post-election news and the scary prospects for our country. We’re trying to find ways to hold our officials accountable for their choices in representing us, and making their voices reflect ours.

But, ultimately, the incoming administration is proving they don’t care about the integrity of a free press or free speech, so we’re going to have to get louder in our support of our ideals and our support of the work of writers whose voices are integral in reminding us what’s at stake: honesty, choice, truth, and our trust in communication.

Last month, we produced White Rabbit Red Rabbit at OBERON. The show was well received, garnering 4 out of 5 stars from Boston Events Insider. From Gwen Walsh’s review: “Jen Taschereau, whose amiable demeanor effectively put the audience at ease during a story which was driven by an oscillation between tension and playfulness…[displayed] true commitment to the act… I can’t stop thinking about this play.”

I (the ever-shifting pronouns–I here is Carissa, as always) have spent the past month thinking about Nassim Soleimanpour’s play. I performed it the first night, then watched Jen and Sam Cha perform is the subsequent evenings. Every night, audience members told me they felt the material was unfortunately timely, in light of the election, which had taken place the week prior. Every night, I watched the play and thought about how careful Soleimanpour was in choosing his words and crafting his metaphors. He told us, in the script, how careful he had to be. I’d originally scheduled the production as a potential vent following the election, as a combination cautionary tale for what we’d avoided and method of girding ourselves for the backlash (because I thought Clinton would win, but I was also aware that violence was coming either way).

But there we sat, too late for caution and its lessons.

Still, I’m thankful for the opportunity to perform and produce the work. Soleimanpour’s methods of coy address gives me hope for methods and means of retaining some semblance of free speech, even as it’s being threatened. And I’m so grateful to Jen and Sam for their bravery, especially in context. 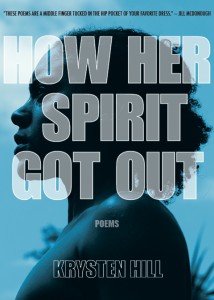 Other writing that’s buoying me through this wreck is Krysten Hill’s How Her Spirit Got Out, which is finally—wait for it—out, just this week. I’m so proud of Krysten and her collection. She asks the hard questions we need to pose to ourselves and our officials right now, and gives us possible solutions for how black women, indeed any women of color, can navigate a society that makes them feel simultaneously abandoned, controlled, fetishized, and disrespected. And Krysten approaches the work from multiple angles, meaning the book is as funny as it is serious, as artful as it is frank, as much an ode as it is an instruction.  And disarming throughout. Short version: everyone should read this book.

And, rounding out AP news, the seventh print annual of apt is now available to preorder. The issue features work by Joanna Ruocco, Krysten Hill, Sonja Condit, Doug Paul Case, and Gregory Crosby. Many of these long stories and poems speak to the various ways women are discounted and downplayed, and how they counterbalance that disadvantage, which has always been important to me, but especially now.

Since it’s mid-December, this is the time when I would reflect on this past year and mention all the things we’re looking forward to next year, but while 2016 has been a year for the metaphorical books, they’re not any I’d like to read, and though I’d prefer to savor time rather than waste it, the quicker we can reverse the damage of these upcoming years, the better off we’ll be. So, here’s to next year, but more so, all the years that will follow, especially those when we rise again.

Posted in: apt, Events, How Her Spirit Got Out, Krysten Hill, theatre, White Rabbit Red Rabbit