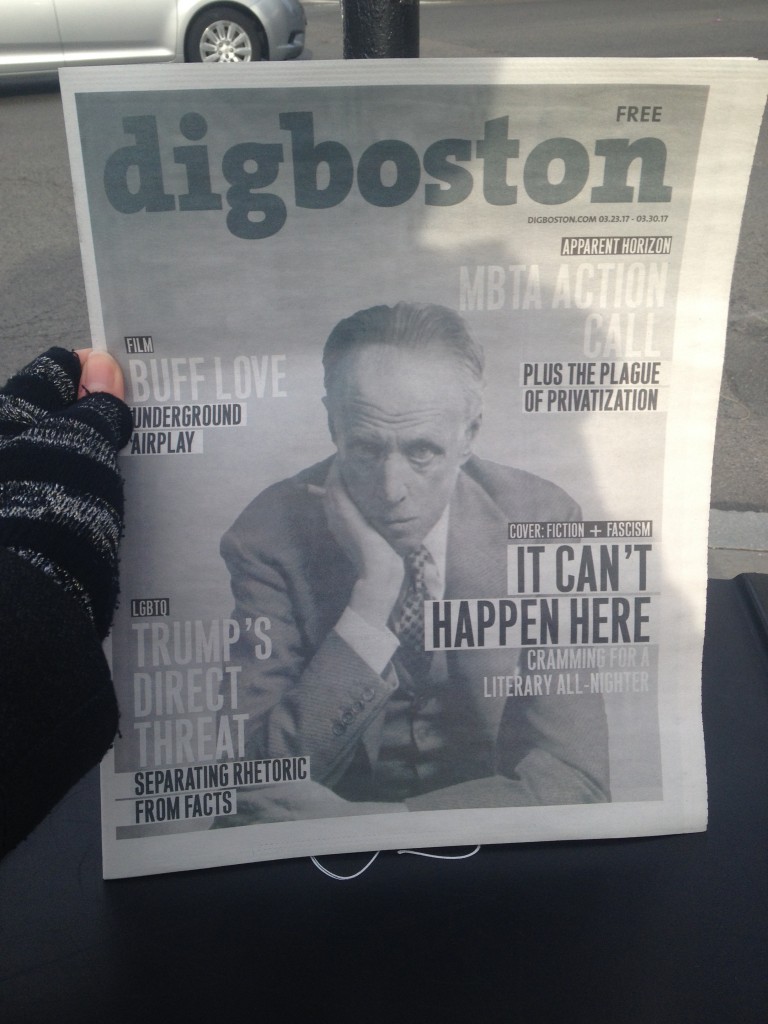 It snowed. It sleeted. There were 40 mph winds. If I didn’t believe in climate change, I’d say it was as if someone wanted to stop our marathon reading of It Can’t Happen Here. But we started with a crowd of 50 people, many of whom stayed for the first several chapters.

One audience member named Alex stayed from start to finish.

We discovered the best way to stay alert was to move around. So people paced. Slow laps, circling in the back. We all wanted to hang in for as long as we could.

Shortly after the middle of the novel, Shuchi started streaming the reading via Facebook Live.

Toward the end of chapter 30, I was falling asleep. I took a 20-minute nap, and woke up not knowing where I was. Then, I heard Ann Leamon reading chapter 31. I remembered what was happening. I rejoined the reading and stayed awake through the rest of the event. After I read the final chapter, I reminded everyone of how we began.

The night started with a presentation, an overview of Lewis’s career, covering who he was and who he wasn’t (a writer who refused a Pulitzer Prize, and later was awarded the Nobel, Lewis never said “When fascism comes to America, it will be wrapped in the flag and carrying a cross.”), also covering what the novel was and wasn’t. It wasn’t hindsight after World War II. It was a warning of the potential danger on its way. Lewis wrote ICHH before concentration camps were synonymous with extermination camps. He wrote it before Hitler’s capacity for malice was fully realized. Lewis wrote during a period of self-assured apathy—people were so sure that America had seen the worst there was of humanity (during the first World War). Of course, it could and did get worse. But that didn’t keep Lewis from rendering his warning.

I have a list of highlights from the marathon reading, but I need to be clear: it’s hard to say that any single amazing moment outweighs my amazement at the event overall. The book is rough. It’s filled with hateful, scared people carrying out orders and making decisions motivated by hate and fear. There’s personal violence and political violence. And, as the novel goes on, more people die by grisly methods.

And beyond that, of course, there are the parallel threats we face now:

The authoritarian in the White House. The constant distraction (Mexico, a dangerous religion, regular allusions to his election rival, etc.). The potential that the president has conflicts of interest (in the novel, he’s embezzling millions). The silencing of journalists, potentially by force. The hunting and killing of people who know more than the government feels they should. We’ve only seen it in Russia thus far, but it’s tied to our election.

ICHH is a difficult book to read just on its own. It’s harder still to handle with the current political climate. I was worried going in that people wouldn’t spot Lewis’s message, and the indomitable spirit of those who would resist attempts at silence. But I was grateful to be wrong.

One woman came up to me after the reading and said her book club had read the novel right after the election, but it hadn’t struck her as funny until she heard us read it aloud.

I laugh at all sorts of inappropriate subjects and times, so I blurted out, “Really?” She said it had been too soon.

More than one person in the audience said the relevance was hard to take. And I understand—I agree—but that’s hardship I think we need right now. This book is not easy, but neither is the situation we’re facing.

In the novel, the authoritarian government sabotages itself due to in-fighting. That could potentially happen to the current administration, but even before that, we’re still facing suppressed speech. Last week, the administration banned the words “climate change,” “emissions reduction,” and “Paris Agreement” in memos, briefings, and other written communication. What can we do in response? Lewis rendered a skeptical journalist who had to be faced with murder of someone he knew before he would speak out against an authoritarian regime. Let’s not wait that long.

If you’re a teacher, a writer, a parent, you can reach a community (even a community of two) who trust you. You can insist on remaining committed to facts. You can write about climate change. You can describe it, define it, make an easy-to-read overview of the Paris Agreement. You can write about how the lives of people of color are more adversely affected by climate change. You can explain to anyone—anyone, your neighbors, your kids, your family members who might be supportive of this administration—the dangers inherent in censorship.

This reading was fun, but it was also more than that—it’s a simple blueprint of what we need to do. Resist, despite the threats. Remain committed to facts, despite the dishonesty we’re fed on a daily basis. And remember that this doesn’t have to be a dour fight. We can fight and still experience joy. And just because we’re tired—and I’m speaking from experience here—we can still rally and make a difference.

And now, as promised, here are the highlights from the reading:

Aaron Devine’s decision to channel Drumpf through Buzz Windrip for the election chapter.

Nathan Gray’s quiet fury in reading the chapter when Lorinda decides to leave.

Tim Hoover doing justice for the Jessup daughters in two different chapters several hours apart—Sissy, still funny and lighthearted at that point, and then the sober fearlessness of Mary’s death

Shuchi Saraswat’s dual dead-of-night chapters (the near escape to Canada, and the formation of the resistance publication the Vermont Vigilance), both read with the tension required by both the late hour and the content.

And every reader who pounded the podium with exasperation when the chapter seemed to call for it (Rob Arnold, Josh Cook, Randolph Pfaff and many others that I’m likely forgetting.

And for more photos and videos, head to our FB and Instagram feeds. 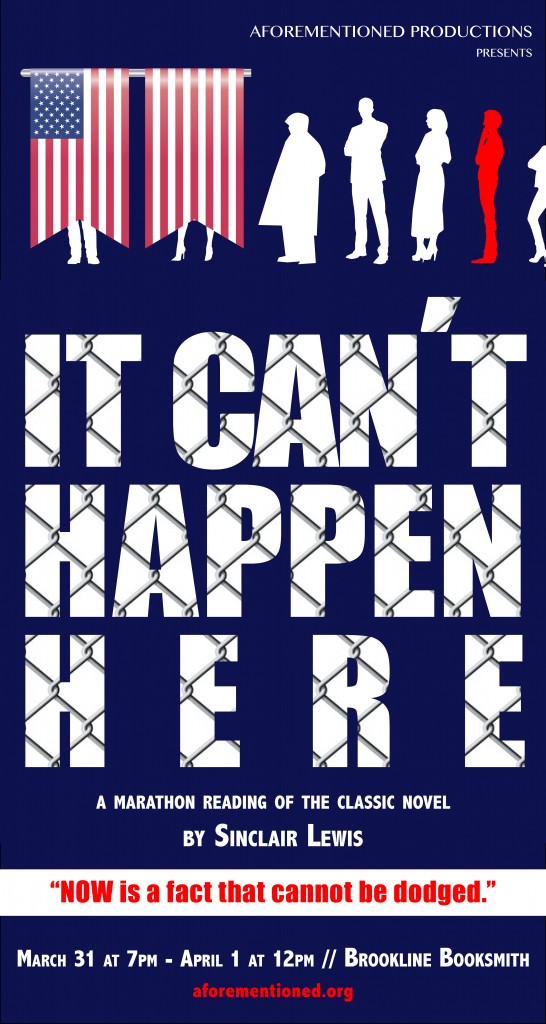 Less than ten days from our marathon reading of It Can’t Happen Here and we’re so pleased to announce that DigBoston is our media sponsor for the event!

They’ve interviewed our own Carissa Halston about marathon readings, the First Amendment, and the role writers play in defending democracy:

“The tenets of democracy speak directly to freedom, but US laws and legal documents have often been written (or interpreted) according to a privileged bias, so, for every right and civil liberty we’ve got, there have been at least two amendments that had to be introduced later to make it clear that women and people of color are also entitled to that basic human right. To that end, in any country where democracy is touted as the foundation of society, the writers of that country need to chronicle the many ways democracy fails. Who democracy fails and how often and why. It’s deadly important information, especially when democracy fails so many people on a regular basis.”

They also asked their readers to suggest more novels about fascism, so once we’re done at the Booksmith on 4/1, we’ll all have more to read.

(Isn’t that always the way?)

Don’t forget to RSVP on Facebook so we’ll know to save you a seat—and some pizza and coffee and maybe some cake—and we’ll see you next week!