HOW HER SPIRIT GOT OUT, Liam Day at BBF, and a staged Aforementioned Production

Friends, it’s finally summer! We’re reading as much as we can, working on apt 7 (which is going to be astounding—fiction by Joanna Ruocco and Sonja Condit; poetry by Doug Paul Case and Gregory Crosby!), and planning a slew of upcoming projects!

Krysten Hill’s debut poetry collection, How Her Spirit Got Out

This is going to be such an important book. As our EIC, Carissa Halston, mentioned recently at Entropy magazine: Hill “questions all the ways black women’s bodies are commodified, used, and disregarded. There’s a great amount of urgency in [her] work, not only for its political relevance, but because she renders each poem as a weapon or a shield and uses both for self-defense.”

It’ll be on shelves this December, pre-sale coming soon!

Afforded Permanence was a finalist for the Massachusetts Book Award in poetry last year, so we’re so proud to have him representing AP (and AP) and the Massachusetts Poetry Fest at the Boston Book Festival this year!

Liam will be reading in Copley Square on Saturday, October 15. Keep your eyes peeled for the official schedule at the BBF site.

We’re so excited to produce a limited run of an experimental play—but we have to wait a bit longer before we can officially announce it.

But we want to give you a glimpse, so here’s what we can say so far. It’s a one-person show with a revolving cast, and it’ll feature our co-founders, Carissa Halston and Randolph Pfaff, alongside AP stalwart Jennifer O’Connor. If you haven’t had the pleasure of seeing Jen perform, get ready, Boston: she’s a delight.

Be on the lookout for more info soon, on stage this fall!

Posted in: Afforded Permanence, Events, How Her Spirit Got Out, Krysten Hill, Liam Day, theatre 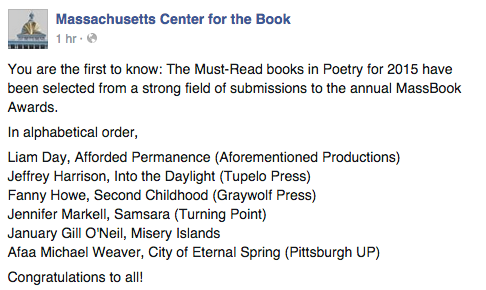 So proud to announce that Liam Day’s collection, Afforded Permanence has been named a Must-Read book for 2015!

You can follow all the announcements at the Massachusetts Center for the Book’s Facebook page, and order a copy of Afforded Permanence today!

“I knew that I wanted to connect that to the changing face of Boston. I chose the view of Charlestown from the top of Winter Hill in Somerville to make that connection, because from that vantage you can actually see the layers of history: from Bunker Hill Monument to Schraft’s factory to the Tobin Bridge to newer plants. Inspiration can also sometimes stem from all of the above, image, sound, phrase, and idea all working together.”

Liam Day talks about Afforded Permanence, Boston, the MBTA, and more over at the Mass Poetry site! Check out the full interview here! 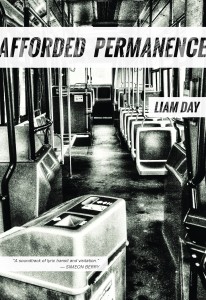 ABOUT THE BOOK
Thirty poems inspired by Boston’s MBTA bus routes, Afforded Permanence chronicles the travels of a lifelong Bostonian and the passing lives of the people who ride alongside him.

RSVP at Facebook (where our lives are lived online) 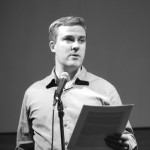 Liam Day has been a youth worker, teacher, assistant principal, public health professional, campaign manager, political pundit, communications director, and professional basketball player. His poems have appeared in Slow Trains, apt, and Wilderness House Literary Review. His op-eds and essays have appeared in Annalemma, Stymie, The Boston Globe, Boston Herald, and The Good Men Project, where he is the Sports Editor.

Krysten Hill is originally from Kansas City, MO, and currently lives and teaches in Boston, MA. She received her MFA from UMass Boston. She has featured poetry at the Massachusetts Poetry Festival, Cantab, U35 Reading Series, Mr. Hip Presents, Literary Firsts, and The Encyclopedia Show Somerville, among others. Her poetry has appeared or is forthcoming in Muzzle, PANK, apt, Amethyst Arsenic, ROAR, Write on the DOT, and Oddball Magazine. Her greatest desire is to form a collective of women poets who travel around teaching the power of voice to the girls on front porches who wonder what that aching in their chests is all about.

Danielle Jones-Pruett is a recipient of a 2014 Rona Jaffe Foundation Writers’ Award. She received a B.A. in English and psychology from Jacksonville State University, and an M.F.A. in poetry from the University of Massachusetts Boston. Her poems have appeared or are forthcoming in Best New Poets 2014, Beloit Poetry Journal, Cider Press Review, Southern Poetry Review, and many others. She currently lives in Salem, Massachusetts, with her husband and sons, and is program coordinator for the Writers House at Merrimack College.

Randolph Pfaff’s poems and essays have appeared in Poet Lore, Barrelhouse, PANK, and H_NGM_N, among others. He edits a literary journal called apt and runs a small press, Aforementioned Productions.

Daniel Evans Pritchard was born and raised in Quincy, with family roots in Dorchester and Roxbury, and is a graduate of both Boston College and BC High. Poet, translator, publishing professional, and critic, he is the founding editor of The Critical Flame, an online journal of literary criticism, as well as digital marketing advisor to AGNI magazine and a board member at VIDA: Women in Literary Arts. His work can be found in Little Star, Fulcrum, The Battersea Review, and elsewhere.
Posted in: Afforded Permanence, Events, Liam Day, MBTA

Excerpt from AP and a new trailer for TWTKCD

To celebrate the release of Liam Day’s Afforded Permanence, we’ve published three poems from the collection this week at apt! As we mentioned there, “For those of you who know Boston, you’ll recognize much in these lines. For those of you who are unfamiliar with Boston, I promise that Liam’s rendering is as faithful as it is eloquent.”

Also, Dolan Morgan rolled out a second great book trailer for TWTKCD, with even more great music from Will Aronson!

The book trailer for AFFORDED PERMANENCE

A few months ago, we reached out on Facebook to ask our friends in Boston to help us with a project: making a trailer for Liam Day’s Afforded Permanence.

Check out the video below, then order your copy of Afforded Permanence (order before Dec 20 and we’ll get it to you by Christmas)! 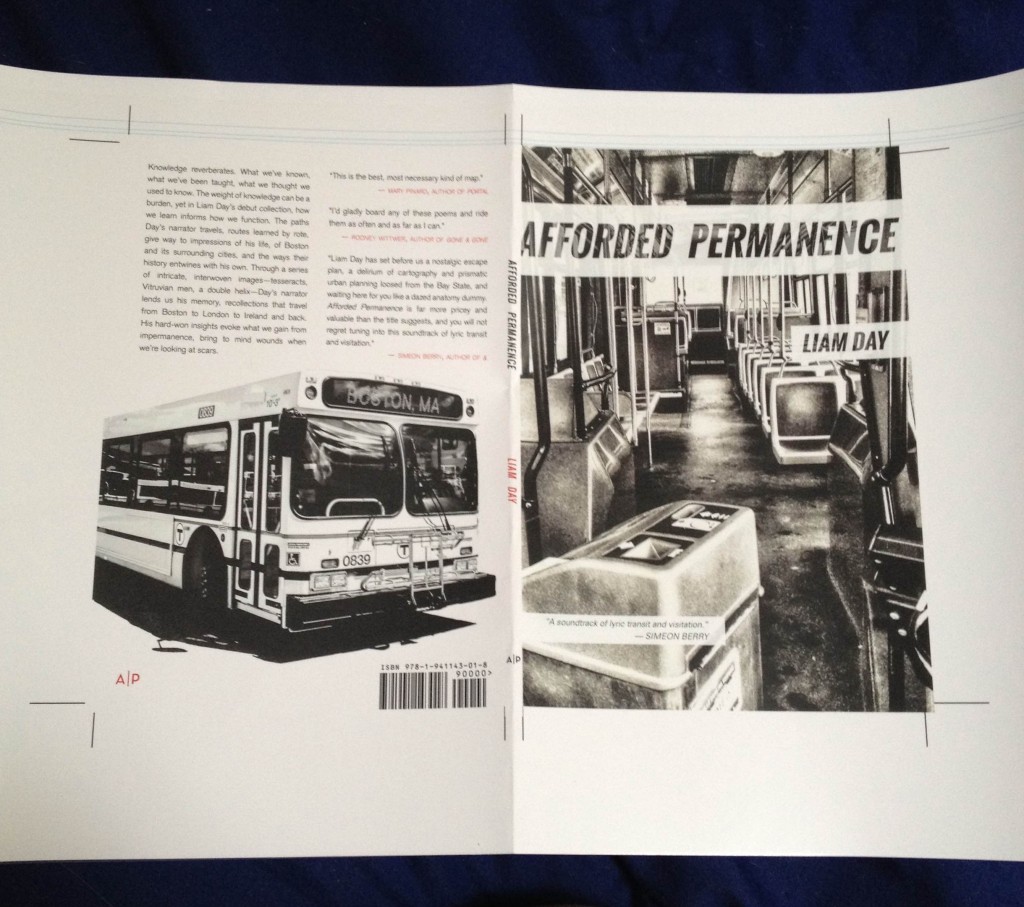 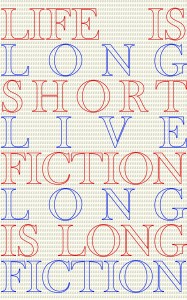 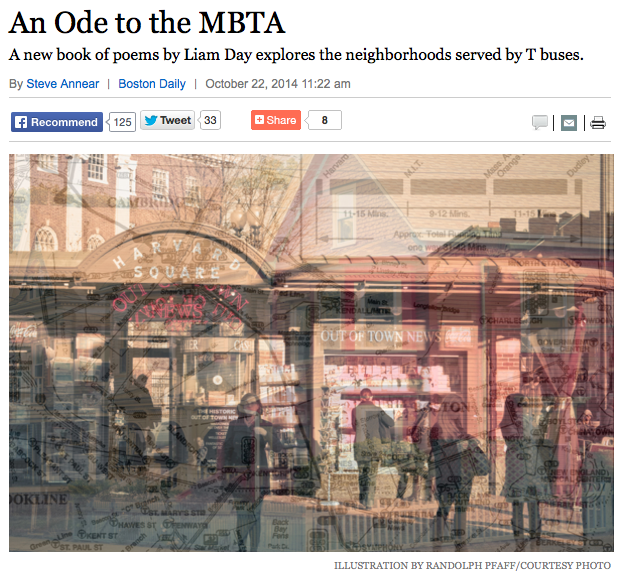 In his vividly descriptive works…Day used the buses as a way to connect to the communities and people they service, rather than making the vehicles a central character in his writing….[the project] took Day into cities and towns he rarely visits, and back to neighborhoods, specifically West Roxbury, where he grew up.

In early summer 2011, we published a group of four poems by Liam Day, each inspired by a bus route in Boston. Since then, Liam has worked to produce a group of thirty poems, encapsulating the city’s history, then expanding beyond it, as the speaker moves within and without Boston’s city limits.

We’re incredibly excited to announce that Liam’s book is now available to preorder, and the array of presale incentives include:

The presale will last through December 17, so get in now, and spread the word!

The praise has been rolling in for Liam Day’s debut poetry collection, Afforded Permanence. Most recently, from Mary Pinard, author of Portal:

“Liam Day’s very fine first collection, Afforded Permanence, traces select bus routes (roots) in and around Boston in poems that tell stories, evoke memories, and capture histories of the heart and mind. His speaker throughout is streetwise and tuned to the rhythms of the city, its various environs, and beyond: this is someone you want to know, both for his sense of direction and for his ways with words. These are beautifully crafted poems—formally accomplished and lyrical, with details that chart the pleasures and complexities of urban life. This is the best, most necessary kind of map.”

We’ve also made a snazzy new cover for the book, which includes kind words from Simeon Berry. Check it out below, then go see all the other details for Liam’s book, and keep your eyes on this space for the presale, kicking off next week! 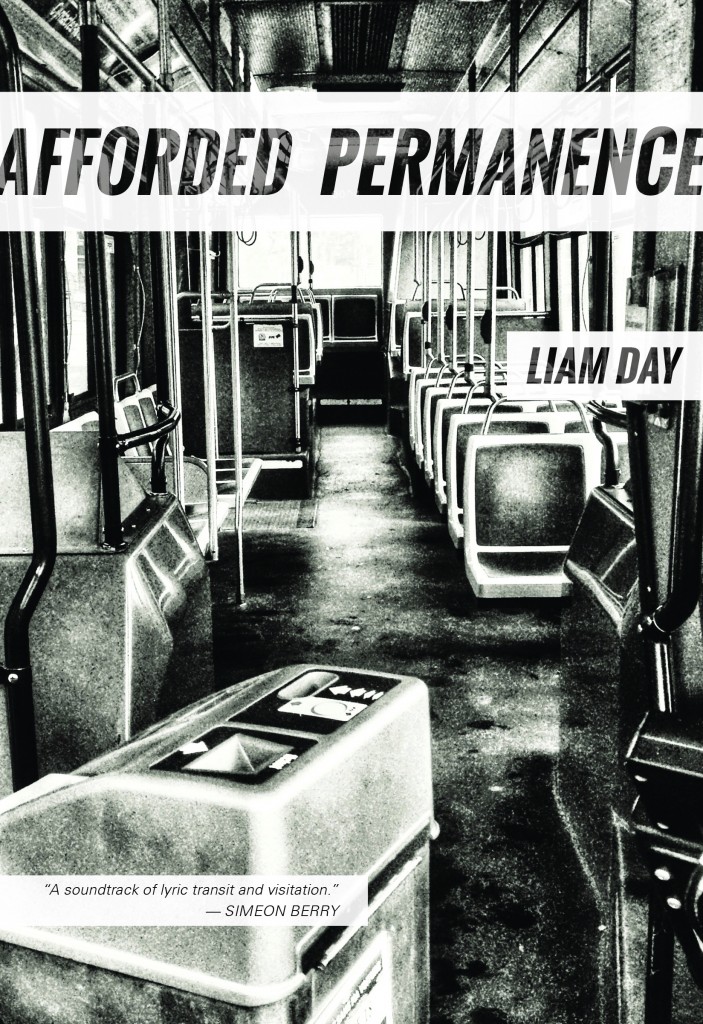